Change of direction, the beach and good friends.

Just noticed that I never published the last leg of our Spring trip. Here it is if you are interested.

Checking the weather the next morning we discovered that the cold front that had come through was also dipping all the way down into Memphis and Mobile Al.. We had decided to take that route to avoid the wind rain and freezing temps. We changed our route and backtracked north about 15 miles and got on I-40 toward Nashville then on to Knoxville and cut out around 300 miles from our original route to N Myrtle Beach. Back up to Missouri  took a right and into Tennessee to cross the Blue Ridge and Smokey Mountains. The first thing I noticed entering Tennessee was how lush and green it was.Coning from out west where where there is a lot of bald rock  the difference was stunning. On the way from Nashville to Knoxville we ran up on a multi car pile up that backed up traffic for miles. There didn't appear to be any injuries but it did take over an hour to travel what should have taken 10 minutes.We stopped for the night in Knoxville and then on to North and South Carolina and the Beach. We did notice a difference in temperatures when going over the Blue Ridge and Smokey Mountains of around 25 degrees from the lower to the higher elevations. And since we were traveling the mountains during the day the snow that had been forecast for the night before was no where to be seen and the wind was a piece of cake compared to what we had experienced leaving St. Louis.


Posted by Freddie and Deby Walker at 8:29 PM No comments:

Email ThisBlogThis!Share to TwitterShare to FacebookShare to Pinterest
Well we did make it home and had a very busy Spring and Summer. Had both parents having surgery and in 2 different Hospitals at the same time. God is good we also celebrated both their birthdays this summer. Dad is 87 and Mom is 85. I had a good summer at work and even re-qualified this 63 year old body in life-guarding! We even put up the new back splash in the RV kitchen. Now to get on the road again. First stop on the agenda is New York City!


Posted by Freddie and Deby Walker at 8:26 PM No comments:

Leaving St. Louis and ahow to Sail a RV!

We pulled out of St. Louis before 10am heading for Memphis in a light rain. By lunch the rain had stopped but the wind had picked up big time! The wind was terrible and gusty and we could see the storm fronts moving around us. Suddenly we heard a terrible flapping noise like the sound of a flat tire without the bumping up ad down. We eased over on the side of the interstate to investigate. In the now pouring rain we found that our awning had started pulling out and was acting like a sail. Now I love sailing but not in a RV down the interstate. Try as we might we could not adjust the awning at all. we limped the few hundred feet to the next exit to find a place to park and work on it. We ended up pulling in front of a school and trying unsuccessfully to fix the problem as lightening boomed and rain poured. Our Garmin showed a RV Park less than 3 miles up the small access road that ran beside I-55 south which we had been traveling. Inching along at less than 25 miles per hour we made our way down the road to discover no RV Park but there was a truck stop just a couple more miles away. When we got to the truck stop the rain had stopped but not the wind. We managed to wrestle the awning all the way out so that we could then rewind it properly. Then we made sure that we secured it including duct taping that sucker before getting back on I-55 and heading to the nearest Walmart 30 miles away. Oh and during this we entered Arkansas also.We parked at Walmart and collapsed for the night. 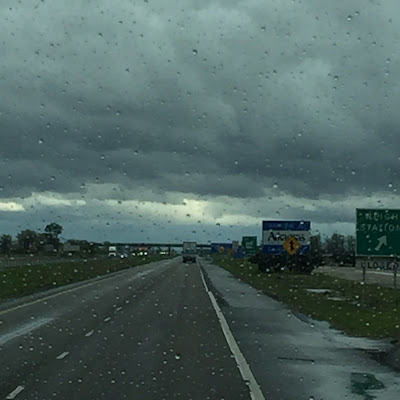 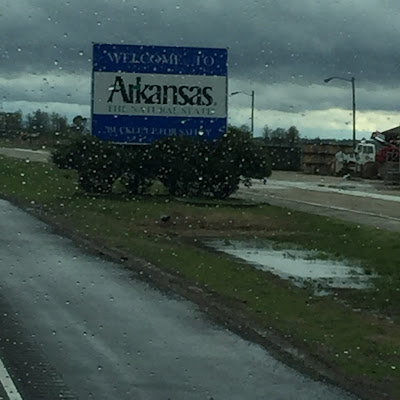 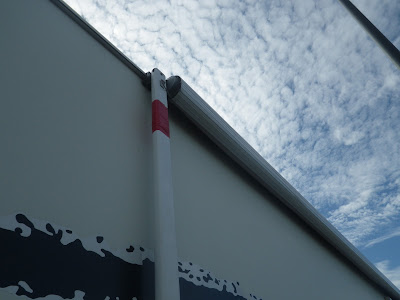 Stayed to busy to take many pictures until we had things fixed up. The last pic was the next morning.

Posted by Freddie and Deby Walker at 1:10 PM No comments:

Through Kansas and on to St. Louis

Everything after Denver was new territory for us. We headed into Kansas and were amazed at the change in the landscape. We saw cattle, horses, sheep, even some ostrich and quite a few windmills. Stopped for the night outside of Topeka, went around Kansas City then landed in St. Louis Missouri.


We stayed in St. Louis RV Park downtown less than 2 miles from the Arch.We were able to walk to catch the trolley which cost us old folks $1 each for an all day pass. With a major construction project going on the area around the Arch was pretty torn up but still impressive. There were a lot of interesting exhibits from the Lewis and Clark era and early settlers, Indians and early civil rights for slaves. Next we went to the City Museum which is incredible!

Posted by Freddie and Deby Walker at 12:06 PM No comments:

We had hoped to head up to Salt Lake City and catch up with Preston and Tara who we met while sailing the Bahamas but snow and sleet met us as soon as we got stared up I-15 so reluctantly we started east on I-70 towards Denver. We had driven I-70 before in a car several years ago so we had an idea of what to expect, sorta. I spent a lot of time praying during the night before about how terrified I was riding down these curving mountain roads.I have been so tremendously blessed to have this opportunity that it was wrong to be so miserable and make Freddie miserable also. Freddie was really doing a great job driving and if God wants me home there is nowhere to hide so I better trust in Him and enjoy the ride!

We ended staying the night in a little RV Park in Limon Co. that night where there were puddles everywhere from the 7 ft snow drifts from that morning melting in the sunny high 60 degree day.
Posted by Freddie and Deby Walker at 4:54 PM No comments:

Tripp had told us that Zion was one of the most beautiful places he had ever seen. Zion is also a National park which means old dudes like us with a Senior Lifetime pass get in free! Gotta love that! With the fuel filter taken care of off we head to Zion. Now one thing about a Class A Diesel RV, if you didn't know is that when you are in the passenger seat and going around a left hand curve it looks as if you are falling off the face of the earth. YES IT DOES! Going down hill at the same time compounds the sensation. Just so you know closing your eyes does not help. Needless to say the twisty turning uphill/downhill drive to Zion was a 45 minute roller coaster ride for me.  I wasn't quite sure how I would survive the trip home. Zion better be worth it. Well it was! 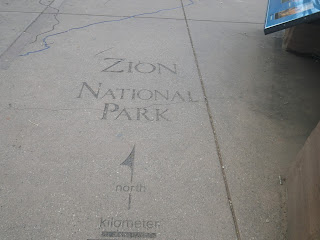 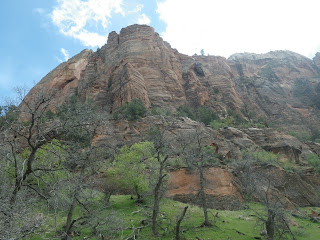 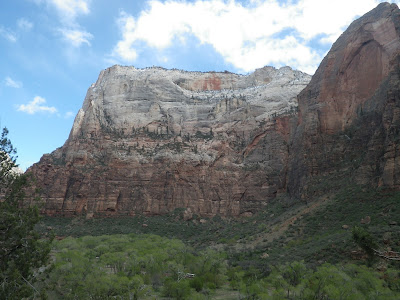 But now I have to get going back on my RV coaster!

Posted by Freddie and Deby Walker at 6:35 PM No comments:

Well the time has come to leave Vegas. It is really difficult to believe that we have been here a whole month! We said goodbye to Tripp and Dana, smothered Willie in snuggles and kisses  and headed out. We have allotted over 3 weeks for the return trip home to include a lot of sightseeing, so we have done a lot of study over which route to take. We really wanted to see Zion Park so we decided to head the 2 hour trip north and then angle our way back down to take I-40 east to avoid the ice and snow up North.


Looks like the front I had checked out so carefully was dipping further south than predicted. As we started to climb the RV began to act a little sluggish. At first we weren't sure about what was going on since we really hadn't had to make any steep climbs like these on the way out to Vegas. Soon it was obvious there was a problem. Freddie could not get the RV to accelerate past 45 even when we weren't climbing. A Walmart was only a couple of miles ahead in Cedar City so we limped along to park there and access our situation. Freddie was pretty sure that the problem was a clogged fuel filter so we searched and found "Amen Diesel" only a couple of miles down the road. Since it was late by then we camped at Walmart ( We have utilized Walmart, after asking permission at each happily during our whole trip.)  and call Amen first thing in the morning.
AND SURPRISE! SNOW! OFF and On all night!

Now on to Zion!

Posted by Freddie and Deby Walker at 5:57 PM No comments:

Freddie and Deby Walker
Freddie worked for the RailRoad for 30 years. He loves keeping up with all kinds of sports (especially Ga. Bulldogs). Deby worked in Recreation for the last 30 years. Starting in Aquatics and has always loved anything around the water. We met while in Highschool and have been married for almost 45 years. We have 3 children and 6 grandchildren. We both have a strong Christian faith and look forward to what God has in store for the future.